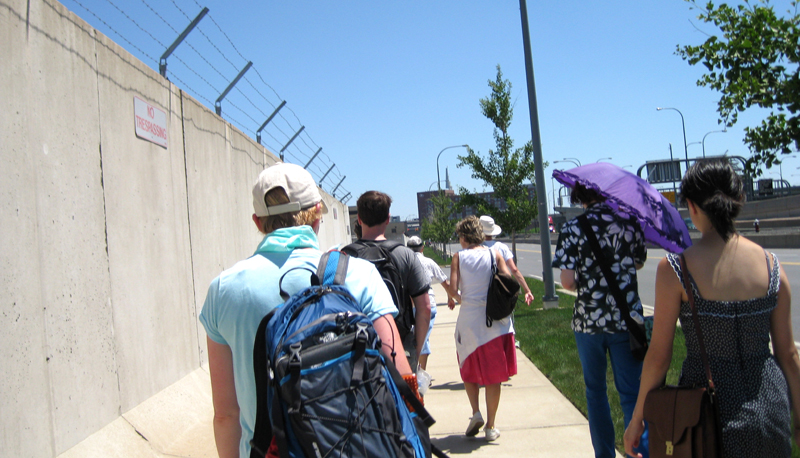 A single sidewalk connects all of Logan Airport's terminals with each other, and with the MBTA's Airport Station. This sidewalk runs past barbed wire, flower beds, busy sliding doors, and walled-up access roads. Millions of people pass it each year, but few ever stop to notice it.

On Saturday, June 19, 2010, about twenty people joined me for a group exploration of this sidewalk, as part of the Common Boston festival. There were a few architects and urban planners along, as well as a man named Mike who'd grown up near the airport in East Boston; a pilot named Patrick who'd written a book about Logan's history; some people involved in making public space more walker-friendly; and a number of other interested local residents. MassPort's spokesperson, Kay, was nice enough to join us as well. 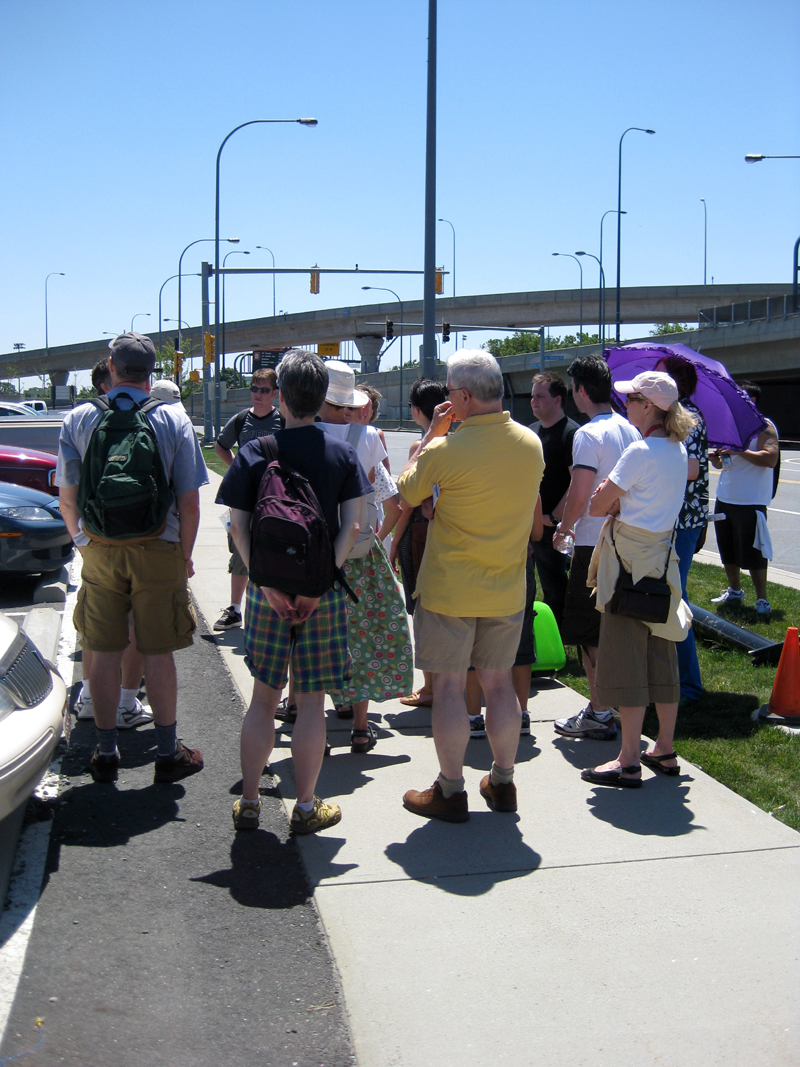 We set out from the MBTA station, and walked about a half mile along a lonely access roads towards the first terminal. Along the way, I gave a brief overview of the airport's history; Patrick and Kay added a number of details. Kay also passed around internal MassPort maps of the area, which she'd brought along for us to look at. These maps filled in a lot of blank spots for me; when I was doing research for the tour, I was surprised by how many things I couldn't find out about the airport's structures.

At the sight of the first pieces of barbed wire, the subject of airport security came up. We talked about blast walls and barbed wire; 9/11; the airport's history of terrorism, terrorist attempts, and sensational arrests of people who were thought to be terrorists; terrorist watch lists, and the Department of Homeland Security; and the fact that I'd had to provide MassPort with a list of the names of everyone who had signed up for the tour (presumably so that MassPort could do background checks). Opinions on these topics varied. 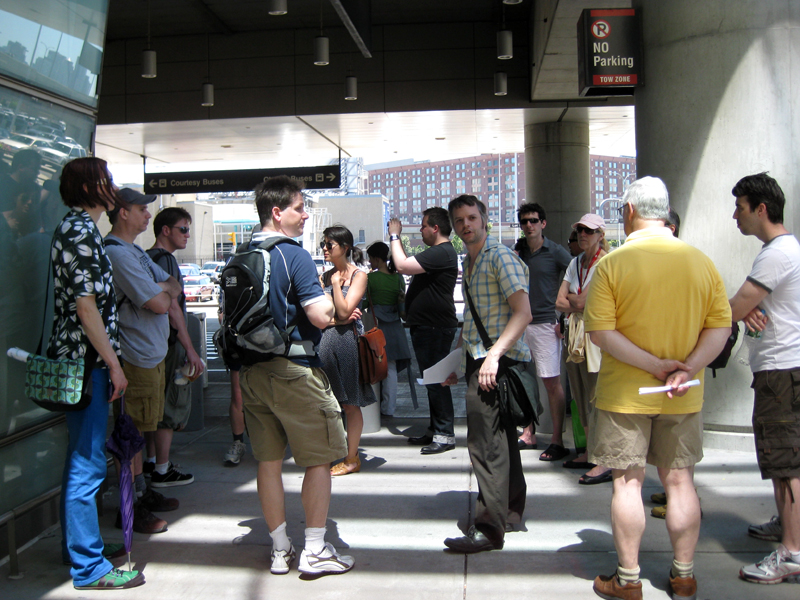 As we walked, Kay and I told everyone about Logan's architectural history. Patrick added information about a number of buildings, such as the fact that Terminal E had been extended out, which explained the strange cul-de-sac at the building's southern end. As a group, we examined and discussed the fenced-off areas for dogs (known as "PetPorts"); the airport's special trash barrels (known as "bomb barrels"); and the strange open areas in front of the terminals. We also stopped and looked at each terminal building; the consensus was that not many of the buildings seemed designed to be looked at from the street. 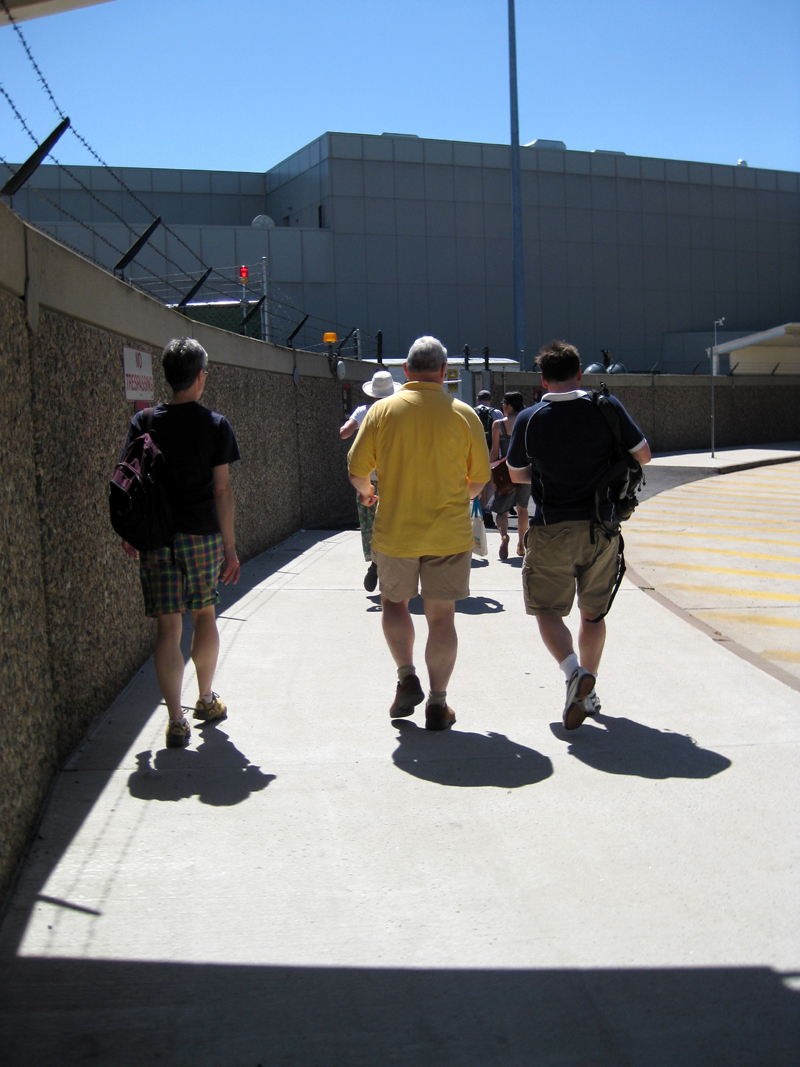 In front of Terminal B, we discussed 9/11 again, since two of the hijacked planes had flown out of Logan. I also talked briefly about the airport's rapid expansion in the 60s and 70s into local residential neighborhoods, parks and nature preserves; as well as the resulting community protests (people laying in front of bulldozers, etc.), and the government's backlash against them (marshals closing off entire residential areas, etc.). Mike, who'd grown up nearby, followed up my historical lecture with a number of more personal details. Kay then told us about the good that MassPort had done for East Boston in the 80s and 90s--such as paying for soundproofing homes and schools, and funding a park or two.

My tour ended at the front of Terminal A. Kay then volunteered to show everyone the third-floor walkway connecting Terminals A and E, which has a great view of the airport and the city. It also overlooks the 9/11 Memorial. We discussed 9/11 again, and then everyone went their separate ways.