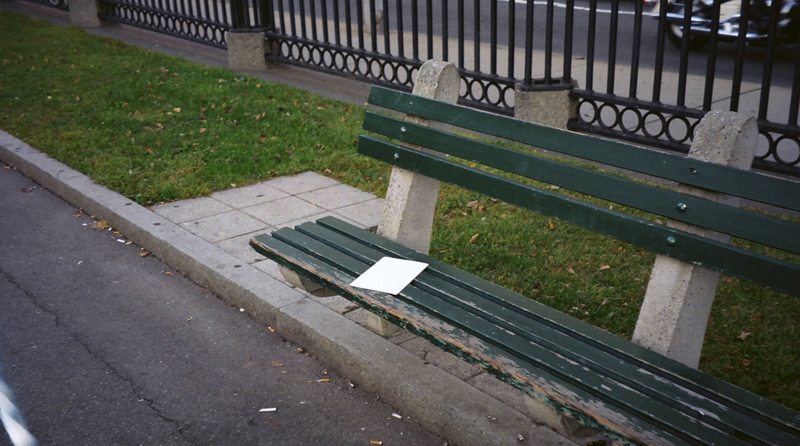 If you're like me, you think there's a little too much advertising in public space. Billboards. Signs on buses, and on cabs. And don't forget about all those logos on our clothes.

So in late 2008, I launched a magazine called "I left this here for you to read" to offer some counter-messaging. My magazine would include anything anyone sent in-written text, images, and even small objects. The only rules were that you couldn't promote a business venture, and that text couldn't be longer than 500 words. I looked at it as a way to support everyone's right to share their thoughts, while at the same time putting the "public" back in "public space."

This material I received was edited into issues by whoever wanted to be an editor; each issue were designed by whoever wanted to be a designer. Fifty copies of each issue were printed up, and sent to a network of volunteers around the world who left it in public places for people to read. No issues were reprinted, and the material was never shared online.

In the winter of 2008/09, this project went viral, and attracted some significant attention. Over 350 people participated in one way or another, and three locally-managed magazines spun-off from the project. I ended up shutting the central hub down in the summer of 2009 because it became too much to coordinate-but I was glad to see the spin-off magazines keep going.

Sebastian Campion. "I left this here for you to read." Copenhagen, Denmark: Guerrilla Innovation. November 17, 2008.