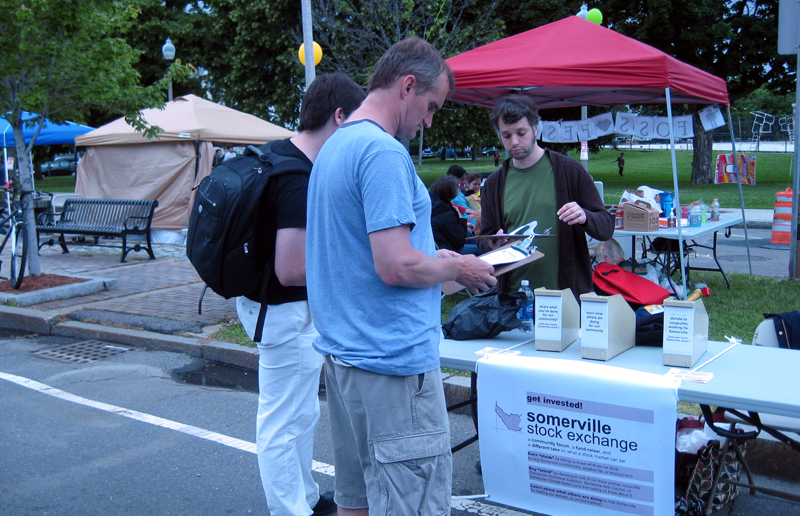 For 12 months, I ran the Somerville Stock Exchange (SSE). Like the exchange that some people in New York run, mine had stocks, stockholders, and shareholder reports. But unlike the New York Stock Exchange, the SSE's stocks were given to people who had done something to benefit the community, or who had donated to one of the project's partner organizations (the Somerville Homeless Coalition, Somerville Climate Action, and the Somerville Arts Council).

There were three types of stocks, representing three ways of looking at my city: community, creativity, and the environment. Obviously there are dozens of other stocks I could have issued, but I decided to work with these three.

When positive things were reported, that stock's value went up. When negative things happened, that stock went down. I tried to be fair, but of course it was all pretty subjective.

I set up my table at various community events around town. To get people involved, I did a bit of community outreach, put up flyers, and generally made a nuisance of myself. I also wrote a biweekly column in the Somerville Patch, and published an ebook.

In the process, I hope I raised people's awareness of what others in the community where doing, and how that related to the larger picture. The end result does show a few things we have to worry about (the increasingly-polluted Mystic River, for instance), but overall I think it's a fascinating view of what some individuals are doing to make their space a little better.

Chris Orchard. "The Somerville Stock Exchange, a year in the making, comes to an end." Somerville MA: Somerville Patch. April 2, 2013.